New-Now you can pay your bill online!

The City of Coos Bay, in collaboration with Oregon Department of Transportation, will be constructing a street improvement project on S. Empire Blvd. between Newmark Ave and Wisconsin Ave, a distance of 4,200 ft.  The project includes street widening, curbs and gutters, sidewalks, storm drain improvements, and landscaping features.  Some of these components would conflict with the existing water main, so the water main will be relocated prior to the start of the street project.  New 12-inch and 16-inch ductile iron main will be installed the full length of the project, parallel to the existing 10-inch asbestos cement main.  The new main will be installed, pressure tested, disinfected, and tested for bacterial contaminants before being placed into service.  The existing main will then be abandoned in place.  Except for intermittent or minor water reconnections of brief duration, no interruption of water supply will occur.

The Water Board retained The Dyer Partnership Engineers and Planners, Inc. of Coos Bay to design and administer the project through construction.  The design was completed in May 2015 and advertised for bid.  Bid opening occurred on June 11.  Because of an error on the low bidder’s bid form, a protest to an award was received from the second low bidder.  The Water Board of Directors subsequently rejected all bids and chose to rebid the project.  Bid documents were reissued and readvertised for bid and rebids were received June 30.  On July 2, 2015 the Water Board awarded the rebid project to Knife River Materials of Coos Bay for $1,225,227.50.

Traffic control will be an important part of the project.  Marple Street will be utilized as a detour for northbound traffic, with southbound traffic allowed on S. Empire Boulevard in one lane.  There may be variations to the traffic control as the project progresses.  Please use caution at all times.  There may be some traffic congestion throughout the project duration.  Access to and from homes and businesses along S. Empire Boulevard and Marple Street will be maintained at all times. We will try to keep any traffic inconvenience to a minimum.

In the Fall of 2015 the Water Board completed a second mitigation project on Matson Creek, which flows into Catching Slough.  This second project reestablished fish habitat at the head waters of the creek; thereby complimenting a previous wetlands restoration and fish barrier removal project on the lower portion of the creek.  In total, 97 acres of fresh water and estuarine habitat has been restored by these projects.  The current project is projected to provide habitat for Coastal Cutthroat Trout, Coho Salmon, Chum Salmon, Winter Steelhead, Pacific Lamprey and Western Brook Lamprey.

The benefit from these restorations projects provide a balancing of natural recourses, which not only strengthen ecosystem diversity, but also support developing water supply projects supporting the public and economic health of the community.  The current Matson project, at a cost of nearly $750,000 allows for the reduction of flow releases from the Pony Creek Reservoir, which will increase potential storage of 275 million gallons of water.  This translates to nearly 70 days of additional water availability for the community; providing a valuable resource during drought years and supporting future water demand increases.  Additionally, the Water Board is continuing to release  nearly 650,000 gallons a day to support fish and wetlands habitat in lower Pony Creek.

Balanced water resource management is an important component in the Water Board’s role as the water provider to our customers and the community at large.

Last year the Water Board completed installation of 2,025 feet of 16-inch diameter ductile iron water main on North 8th Street in Coos Bay.  This Water Board designed and contractor installed water main is the primary line supplying industry and business along Highway 101 in North Bend.  The old 14-inch diameter main was 1940's era cast iron.  This older pipe has very stiff joints that are prone to failure.  Improving the reliability of the full length of this vital segment of the distribution system is a current goal of the Water Board.  This project together with two past projects on North 10th Street have replaced over 4,000 feet of the 11,000 feet of 14-inch cast iron main originally installed in the 1940's.

The Pony Creek Treatment Plant (PCTP) is a surface water treatment plant providing potable water for the cities of Coos Bay and North Bend and outlying areas.  It was constructed at its current location on Ocean Boulevard, Coos Bay in 1991 at 6.0 mgd.  Soon thereafter the plant was expanded to 8.0 mgd.  In 2011, the Water Board embarked upon a $12.7 million project to expand and upgrade the PCTP to 12.0 mgd, maximizing the yield of the Pony Creek Watershed and satisfying community water demand through 2040.  The project was funded through a $10 million loan from the Oregon Infrastructure Authority and Water Board capital funds.

In addition to increasing production capacity, the project upgraded the treatment process to conventional treatment with flocculation and sedimentation, upgraded the four existing filters and added one new filter, provided treatment facilities for manganese control, modernized instrumentation and control systems, added emergency power generation, and ensured compliance with current and anticipated water quality regulations.  The project was designed by HDR Engineers of Portland and constructed by James Fowler Company of Dallas.  The project was completed in June 2013.

The Glasgow Reservoir is a 23,000 gallon concrete reservoir with wood superstructure constructed in 1955.  The roof is constructed of plywood sheathing and composition fiberglass shingles.  The entire superstructure and roof will be replaced with new steel trusses and roofing at an estimated cost of $67,000.  Architectural services are being provided by Lon Samuels, AIA.  The project will be advertised for bid in September 2014 followed by construction.

The telemetry system in Hauser is being upgraded, replacing new computer hardware and software for obsolete and unreliable tone technology.  The new telemetry system will be compatible with the Water Board’s SCADA system and will allow reliable monitoring of reservoir levels and control of pump operations.  Other features include smoke detection, intrusion alarm, flood alarm, and water pressure sensing on pump suction and discharge lines.  The project cost estimate is $33,000 with monies provided by Water Board capital funds.  The anticipated completion date is August 31, 2014.

The Water Board completed two contractor installed water main projects in the summer of 2013.  On Anderson Avenue in Coos Bay, 775 feet of 6-inch unlined cast iron main was replaced with 8-inch diameter PVC water main.  In coordination with the Coos Bay Downtown Association, this project in downtown Coos Bay was constructed at night to minimize disruption to downtown businesses. 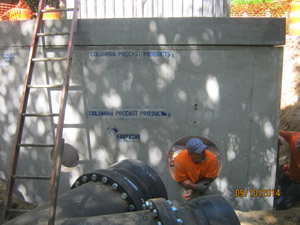 The Ocean Boulevard Water Main Replacement Project replaces an aged 8 inch diameter main with a new 20 inch main.  It will connect to the finished water line at the Pony Creek Treatment Plant (PCTP) and provide redundant transmission service to the distribution system.  The new main is 1,500 ft long and extends from the Water Board driveway entrance on Ocean Boulevard to Woodland Drive in Coos Bay.  It includes automatic valving such that distribution reservoir levels can be controlled via the Water Board’s SCADA system.

Laskey-Clifton was issued a Notice to Proceed on May 7, 2014.  Substantial completion is targeted for November 3, 2014.

The project budget is $1,037,000 and includes the construction bid from Laskey-Clifton Corporation of $814,000.  The Dyer Partnership is the consulting engineer.  The project is funded by Water Board capital funds.

Providing a Reliable, and Quality Service For the Present and Future Needs of our Communities